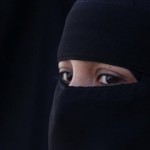 I was reminded the other day about the stigma that western society has attached to certain middle eastern articles of clothing, namely the burqa, niqab and the veil. I was reminded of the fact that people feel there is some risk that there’s a terrorist in there someplace, or that it is degrading to women. These views had not existed before islam became a household word, mentioned every day on the news and around the dinner table. At least not in the current vehemently racist form, or the vehemently covering-up-for-the-fact-that-I-hate-brown-people form.

Egypt is banning the burqa, as if this single action in a predominantly Muslim nation is going to discourage… what? Terrorism? Gender inequality? I’ve concluded a long time ago that the state banning clothing nationally is anything but democratic, and nothing but unfounded paranoia and knee jerk, racist reaction based on emotion and not on logic. If we use the balaclava in North America as an example, we can say that anyone wearing one has a risk of being a criminal so we have to ban it to protect citizens. We can further say that it would discourage robbery. We can go further still and state that we need to identify the culprits who wear either “garment”. However, neither example protects anyone because robbers will still rob and terrorist will still terror.

A robber facing a ban on the balaclava would simply switch to some other way to hide their face, same with a terrorist. Face paint can be laid in such a way that it distorts the facial features by showing shadow where there is none. Just check out cosplayer Kay Pike on Facebook and you will see what I mean. Will we then ban face/body paint? Will we ban scarves? How about hoodies? Costumes during comic cons? When it comes to suicide bombing, will we ban all vests because that is what’s commonly used to strap bombs to? Maybe we should ban duct tape. How about banning cars because many drive bomb-laden cars into shops.

It is said that students in universities cannot hear those speaking while covered. In that context it may have some merit, but most of the burkas I’ve seen were such light material that it would make little difference. Other than that, if it did muffle voices that is simply a respect issue and should never be a legal one.

Egypt is a Muslim nation among many. The burka may be religious, or not, but it certainly is liked by many Muslims and worn by many Muslims. As usual, blame is focused in the wrong direction. Banning clothing is a way for a nation to pretend they’re taking action against potential terrorism, when all they’re doing are being bigots.

Either way, the burqa, niqab or veil aren’t the problem… our invented ideas around them are. What is the problem is western hypocrisy and the idea that the patriarch is always superior, something that both western society and ISIL/Saudi Arabia have in common. I’ve got a quote for you. It was in an article recently about the same topic. “Why are you so quick to remove clothing from women?” Now, I can imagine your initial instinct is that I am saying your intent is to remove women’s clothing, have them dress down so we men can see them. If men truly want equality and respect for women, then equalize women and respect them. Live the philosophy don’t just redirect blame and imagined affront across the great pond so you don’t have to.