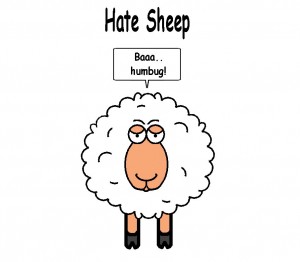 New Term:
Hate Sheep – Those people who end up hating someone because all the cool kids do.

This is a phenomenon that starts in kindergarten, lives on in elementary school, grows up in high school and perpetuates throughout adulthood. Many of us suffered this form of hate when we were kids and for some reason, most of us forgot what it’s like to be on the business end. You remember deep down how it felt when you were told how much you sucked but were never given a decent reason for it.  Somehow you’ve forgotten how unfair it is. If you were on the giving end you, at least, remember copy and pasting the excuses given to you by your peers without actually verifying them. Seriously what kid does?

Back in the day, I hated AC/DC and only because my older brother did. The excuses he used, “their music is the same basic three chords over and over again”, “Angus can’t sing so he has to scream” etc., were not mine… they were his. I just copy and pasted. This also played a role in the old me being such a homophobic, racist, bigot. I hated turbans in the RCMP, and in the Legion, because the uniform is uniquely Canadian, and a headdress must be removed in respect for those who gave their lives in countless wars, respectively. But, those reasons weren’t my reasons. I simply copy and pasted them too. Until a few years ago I had no idea that one cannot just remove a turban. It takes hours to wrap loooong hair in one of those things, something that takes serious dedication to be performing every morning for your entire life. That kind of dedication to a belief I respect. You cannot just take off a turban and put it on like a hat. Seriously google it. I hated Tom Cruise because he was a “fag”, again not my reason. I still do not like the guy but for my own reasons this time (but, that is another story). Other victims of my hate-sheeping were Madonna, Cindy Lauper, Prince, Boy George, and the late Michael Jackson.

Over the decades, I’ve learned how unreasonable I had been. Perhaps it is called growing up, self-realization of proper morality or maybe the kind of individualization we all need in order to avoid being unwitting sheep. Regardless, once the transition began there was no stopping it.  Back then it was as if a part of my brain was disengaged… or maybe imprisoned by peer pressure until I acquitted it and allowed it a voice in the greater macrocosm of my psyche.

In the last few days, the latest victim of hate-sheep was Ben Affleck. I was struck by the sheer simpleton-like aspect of the hate that he’s been getting ever since I remember Affleck being a thing. Back when he did Daredevil I watched it, liked it and thought it was a pretty entertaining film. I thought Ben did well in it. Then I heard how many people bandwagoned into a self-sustaining, self-propagating, row of haters using the lamest, unsupported excuses that I know is a load of male bovine feces. I like Affleck. I like everything he’s been in that I’ve watched. So, when the ugly head of the collective of hate-sheeple reared I had to address it… and I still am. It’s fine to not like someone. But at least, know why you don’t and ensure that the reasons you don’t are your own, and not the result of wanting to be one of the cool kids… because otherwise all you’re doing is keeping a critical part of your brain imprisoned in a Guantanamo Bay of mental illness.