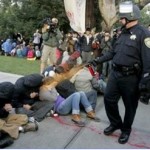 Should the right to be forgotten extend to organizations and companies? For example, the issue from 2011, when the University of California police pepper sprayed peaceful protesters, just popped up again. It appears that the university has shelled out hundreds of thousands of dollars to have the internet clean up the tarnishing references to that incident. Should organizations and corporations that do these bad things be allowed to have them forgotten? Many of us already know how horrible Monsanto is. Should Monsanto be allowed to spend huge amounts of money to have their image cleaned up? Or, as I feel, should these things never be forgotten, especially on the internet where people, who have never heard of them before, can then see them fully and uncensored?

To be honest, such a task is strenuous at best, and probably ineffective. You may be able to erase something from parts of the great internet, but you cannot erase it from the minds that have already witnessed such things. In a world where large media is losing its foothold on the truth people are turning more and more to unofficial sources anyway, like blogs and YouTube channels. Can you erase them from a google search? Can you erase them from social media?  Facebook, Twitter and many others have become a source to spread awareness of matters like child abuse,  terrorism and state persecution of peaceful civilians.  Can you erase everyone’s comments, posts and links? Maybe some, but you would be fighting a losing battle.

So, maybe this really isn’t about whether or not non-person entities like universities should be allowed to be forgotten.  Perhaps this is more of a question of can they be forgotten. The Washington Post’s own article has brought the issue right back to the first google search page under the news tab. All we have to do is provide a link to a google search for this incident on any popular news comment section and it will be right back in the search results again. This article cannot be erased.  Maybe if a hacker is successful they can trash this copy of it, but I have more and can repost it anywhere.  The point is the all we have to do is keep talking about it and we’ve undone the University of California’s attempt to monetarily manipulate the internet.

Let me give you a few what-ifs. What if Hitler were alive today and was allowed to erase all internet references to the holocaust? What if proponents of pipelines were allowed to erase the environmental damage caused by the construction and operation of past pipelines? And what if Donald Trump were allowed to erase everything he’s said and done in a couple years and run again for the GOP nomination? Would they be successful?  I have to say no. Spend what you want for a cyber memory purge of your misdeeds, but far too many of us will remember what you’ve done. Some of us will make sure others do as well.