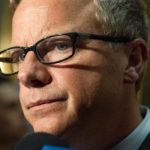 Today Saskatchewan Premier Brad wall admitted that the oil industry in Canada is losing the battle against environmentalists. Which is a shocking statement coming from the guy when we consider the fact that any negativity about the industry merely serves those opposed to it. “Grim Leapers” is his coined term for the supporters of the Leap Manifesto. I admit that it is a catchy term, and I applaud whoever came up with it, but it is also political hyperbole. He certainly doesn’t mean that the proponents of the Leap Manifesto are on the level of the Grim Reaper… does he? I mean, I’d hate to think that the majority of Saskatchewaners voted in someone with a level of crazy only found in conspiracy nutjobs. If he is actually serious about the grimness of the manifesto then we have about 4 years more of that kind of crazy.

We know he doesn’t like the manifesto because of his coining of Grim Leapers. We know he has scorn for environmentalists, because he can’t hide his emotions to save his life. And we know he is deep in the oil industry because he refuses to initiate a carbon tax in Saskatchewan, even though one will be forced by the federal government if he does not. His hostility to oil opponents is so vehement the words ‘thou dost protest too much, Mr. Wall’ comes to mind.

“Today there continues an existential threat to this industry,” He admits. That one statement is going to fuel the next round in the war against oil reliance. Don’t misunderstand, the threat is real and will only get more real as the time to turn around the global warming trend runs out. It doesn’t matter if you don’t believe it, because in the end, the heat, drought, collapse of that which supports human populations – and the resulting civil unrest as food and water grows more scarce by the year – will get you regardless. So, Wally is not lying. The threat from environmentalists is very real. But that threat is nothing the rest of us have to worry about… only Brad Wall and the oil industry. I would like to know what kind of brain damage Mr. Wall had suffered to make him think how his attempt to scare the oil industry into “redoubling” their promotional efforts is going to do anything more than give environmentalists fuel to fight with more gusto, and oil investors a reason to pull their money out now while they still can.

Is Wally really trying to out doom-n-gloom us? Maybe. It certainly looks like it. But, this tactic is not going to pay the dividends he expects. I want to know why he is protesting energy change harder than any other premier in Canada. Is he really in the pocket of oil… or has he himself invested so heavily in the industry that failure now will drive him into the welfare lines? One look at his face shows the desperation of someone about to lose it all. I rail against the rich regularly, but I don’t want them to be poor either. All I want is fairness and a reasonable dialogue between all Canadians in order to reach a common good for everyone. I want no one left on the streets, global temperatures to stabilize and an environment that is not regularly sacrificed for greed. If Premier Wall fights this hard it is obvious that he doesn’t want the same things I do.