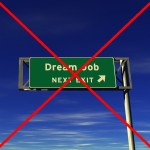 Step One: First and foremost one must remember that it is nearly impossible to get a job that perfect. Seriously, don’t dream about the job you love, get paid well for, that uses your skills every day, rewards you for work well done, where everyone respects you and want the best for you. That is fiction… smarten up. The sooner you realize that your pipe dream is not achievable, the better off your sanity will be. This realization may even keep you from a future suicide attempt.

Step Two: Now that you know that nearly every attempt to land and keep even a reasonable job is doomed to failure, you can now prepare for the blockages you will encounter.

You got a new promising job! Congratulations! As always, try your best, work hard and a promising future… will forever remain out of reach!

The first of these blockages will appear within the first month… if not sooner. This is that coworker who, for some mysterious reason, just hates you. It could be that they feel threatened that you are just better at the job than they are. Maybe you inadvertently insulted them, but they won’t say shit to you about it, so you’ll never know. It may even be as simple as they just don’t like your face. Regardless of the reason, that coworker needs to be set up in such a way that they get themselves fired. First, bear in mind that nothing you can do will cause them to change their mind about you. They hate you and always will.

Next, find those things that you do so much better than they do, and just do more of them. This will piss them off every time. Don’t worry that they will simply hate you more and more, because that is your goal. What you want is to cause them to hate you so much that they will pay more attention to getting back at you that they will let their own duties slip. The more you rub their nose in the fact that you’re damned awesome the more they will let their own job suffer. The boss will see this, and may tolerate it for a long time. Stay the course, because eventually even the boss will get sick and tired of the person laming out that the coworker will get fired.

Step Three: It is possible that the coworker has badmouthed you to other coworkers. The easiest way to tell if this has happened to you is to watch for those whose behaviors and attitudes that have changed pretty much overnight. Don’t fret, because as mentioned above, you will probably never get that ideal job, anyway. This is where the optimism for that new job takes a serious nosedive. People are fickle, especially coworkers that have been there longer than you have. You are the newbie and as such you are not seen as worthy of being asked if any given story is true or false. They are all friends with the coworker who openly hates you and therefore they will always believe that coworker’s word… no matter how insane the story is.

Step Four: Now that you’ve gotten rid of that hostile coworker, just by being awesome, you can now turn to the next blockage… all the other coworkers who are now working against you. At this point no matter what you do or say it will make no difference at all. Even after the first coworker is fired they will not see his/her own behaviour as the cause. They will only see that YOU got him/her fired. It is your fault and you now you need to pay dearly for it in the form of shunning and anything else they can think of. From here on you will never be given the benefit of doubt. Even the boss may be part of the group against you. You may well be set up for failure at every opportunity. You are the enemy now.

The best you can hope for is not getting laid off for some trumped up reason (but don’t hold your breath). Because nothing you do will make a difference you might as well be a regulation nazi. If they’re smoking right by the door, complain about it. If they’re not following procedure, call them on it. By now you know the drill… it’s war.

Step Four Sub: Of course you could always keep your nose clean, don’t do anything back at them, be all happy looking and kind. But, you and I both know this will only open you up to be mowed down by their cavalry. Congrats, due to no fault of your own, you are now the target for the tiniest little mistake (that they get to make and never hear a bad word from the boss), and you can suddenly never do anything right (even though your work habits haven’t changed a bit since day one).

Step Five: Now it is probably a good idea to look for a new job, that is if you haven’t been laid off yet. Look for something that is completely unrelated to the industry you just left, because those ex-coworkers will badmouth you to everyone related to that industry.  Of course, your pay will probably drop with each new job, so the graph of your income will zigzag downward over time.  Relax, because that’s capitalism!

Step Six: Now that you have found that new promising job, be sure to do really well at it from day one, because you need coworkers and bosses that like you. (See Step One)