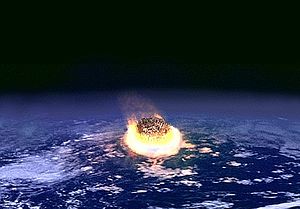 As the Nemesis hypothesis states every 26 million years a long-period, dark stellar companion to our sun comes around and disrupts Oort Cloud objects.  The chaos that reigns supreme results in sending a number of comets into the inner solar system, where one usually ends up slamming into Earth causing mass extinction.  The idea had been put forth initially in 1984 by Daniel P. Whitmire and Albert A. Jackson IV and, despite the lack of supporting evidence, the hypothesis persists today.

A number of survey studies have been done to locate any potential Nemesis objects out in the stellar neighborhood but those studies have uncovered a remarkable lack of anything in support of the idea.  The only evidence was the periodicity of the extinctions every 26(+/-) million years and the impact that killed off the dinosaurs.

But, you know how some conspiracy types only need the initial idea… which results in the death of many windmills.  So, today I’ll simply put forth the one glaringly obvious mistake Whitmire, Albert and conspiraphiles have made in their mad pursuit of an idea.  All we need to do is take a look at the past extinctions and the possible causes (evidence-based) of each one.

Starting 444 million years ago the end of the Ordovician period saw a loss of 86% of all sea life.  The majority of life on earth at the time were filter-feeding sea life.  This loss was not as instantaneous as the impact that killed Barney’s ancestors 65 million years ago and took about a million years.  The cause, as evidence shows, was likely a short ice age that lowered ocean levels.  It is suspected that the rise of the Appalachians exposed silicate rocks that sucked the majority of the CO2 out of the atmosphere.  This in turn dropped global temperatures even more.  Evidence renders the cause of the Ordovician extinction as a result of a comet from the Oort cloud as a bit silly, in my opinion.

375 million years ago the Late Devonian period saw the loss of 75% of species globally.  Scientists suspect it was new plant life that had just formed, whose roots disrupted the soil and released nutrients in the ocean.  This in turn caused algae blooms to suck the oxygen out of the water and suffocating the very successful trilobites, that incidentally survived the Ordovician fiasco.  Tough luck, little guys.  Other bottom dwelling life also found themselves dead.  This is a more Occam’s Razor friendly explanation.  There is no need for a Nemesis here, as the evidence we have does not point to an as yet unseen long-period dark companion.

The end of the Permian period, 251 million years ago, was one of the worst extinctions in earth history.  We very nearly wouldn’t even be here right now if it was just a wee bit worse than the 96% loss that we see in the fossil record.  This was so bad that it is often referred to as “the Great Dying”.  This event is characterized by a sweet little combination of events.  We’re talking a huge volcanic eruption, that reclassifies the worse we see today as mere farts by comparison.  This caused methanogenic bacteria to pump out that cute little greenhouse gas called methane.  Combined with hydrogen sulfide, and CO2 belched out by that massive volcanic event, the earth global temperatures soared, oceans acidified, life stagnated.  Though evidence is hard to come by, because the earth completely recycles land and sea floors over the course of 200 million years, the data we do have on this greatest of extinctions points to a local cause, not a stellar one.

200 million years ago the Triassic period found itself losing 80% of its life forms.  Though research into this particular event has not yet uncovered any clear cause, when we take the past 3 extinctions and their causes into consideration, the Triassic extinction is no longer a part of any pattern.  3 events makes a pattern, 2 events make a line and that is all we can say about the Triassic.

The end of the Cretaceous period, 66 million years ago, is perhaps the most famous extinction event in earth history.  It makes sense, it is the most recent and the one that cleared the stage for mammals to take our place as rulers of this blue marble.  This event was punctuated with an asteroid impact that wiped out 76% of all life.  Most of that was right after the initial impact that caused a global fireball, that sucked up available oxygen, fried plant and animal life and covered the entire planet in a dust cloud.  We’re taking nuclear winter, starvation, death ,mayhem, dog and cats living together.

So, in five major extinction events we have 3 of them that have clearer causes than an evil stellar companion.  What we’re left with is one event, for which we have no good explanation, and one event caused by an object impacting the earth.  That’s 1 event that is clearly of extraterrestrial origin, and we don’t even know that it was a comet from the Oort cloud.  The conclusion is that there is no evidence for Nemesis, no reason to believe the idea possible.  There no reason to hypothesize a more elaborate explanation than those supported by physical evidence.

But, what about the minor extinction events between those I explained above, namely Cambrian, Carboniferous, Jurassic, Cretaceous and Neogene?  Remember that nearly all these events have theorized/hypothesized causes from local processes and changes the earth was going through at the time of each extinction.  It just makes more sense than the sensational idea of an evil dark maid, that comes around every 26 million years to clean house.

So far, we have not found Nemesis, and that is not for the lack of looking.  We used telescopes to peer into the darkness.  We detected the motions of stars in our local area.  We studied the data we collected and have not found a single shred of evidence for it.  If we do find a long-period red dwarf, or brown dwarf, or other object that can account for the motion necessary to disrupt the Oort cloud, I would give the idea more credit.  That certainly would not clinch the case and move it from highly unlikely to highly likely, merely from highly unlikely to a little less unlikely.  And that’s how science works.  Science is difficult.  To reflect the sentiments of Dan Brown, if it’s not painfully difficult, you’re doing it wrong.