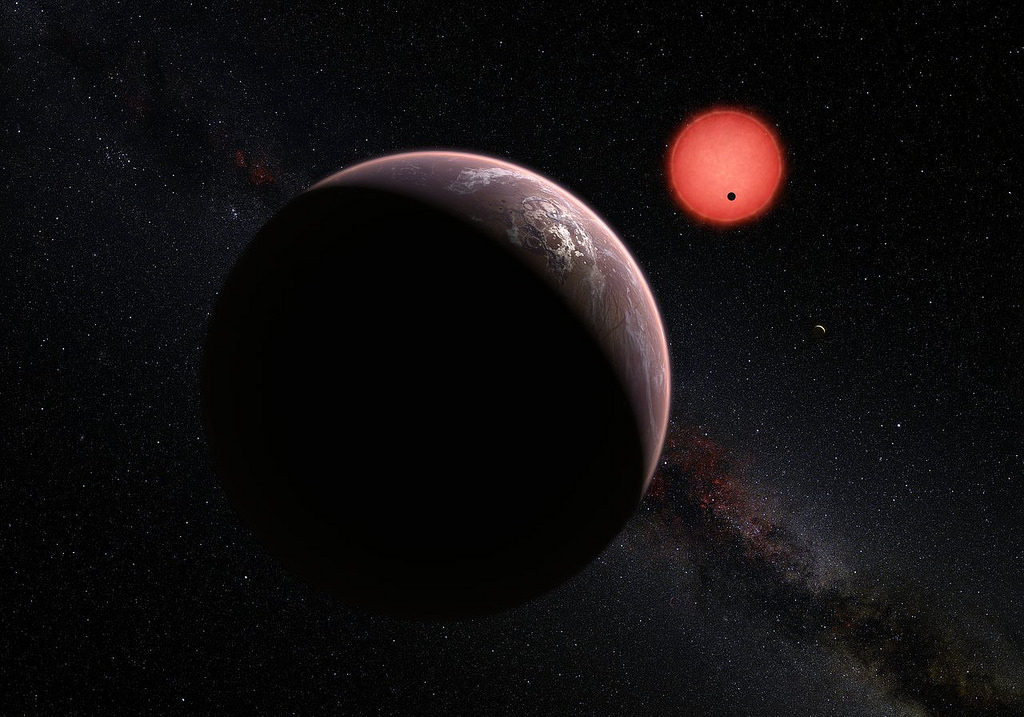 When the Spitzer space telescope was launched in 2003 few (if any) imagined that it would be used to find planets orbiting around the red dwarf star, Trappist-1. Yet that’s what the research group, headed by Michael Gillon, astronomer at the University of Liege, Belgium had done. Spitzer was not initially intended to find planets. It’s mission was to observe the universe in infrared wavelengths. The team that discovered the new worlds in Trappist-1, saw the potential in Spitzer and worked toward making this wonderful discovery possible. This find is amazing for many reasons, but those that I see that are at the leading edge are; three of the seven are nested beautifully in the habitable zone of the host star, and the strong suggestion of liquid water.

How water managed to get onto these three worlds is not completely known, however the team theorizes that the planets in question started further out from the star, where water ice was abundant during the system’s formation, and migrated inward to their current orbits. I’ve looked for the reasoning behind this and did not find any. However, I will take a rough stab at it. All seven worlds around Trappist-1 A influence each other gravitationally. They tug, pull and jostle one another as they circle the star in days-long orbits. This aspect of their behaviour tells me that these worlds would have been prevented from forming in the number and sizes they have so close to the star itself. If planets formed that close there would not have been that many. Some of the seven planets had to have formed elsewhere. In the end the matter that we see as seven planets would have formed perhaps three or four larger planets. But, this is not what we see.

Additionally, it is doubtful that water would survive so close to the star in ice form long enough to be delivered to the protoplanetary bodies. The water had to have been delivered further out where the star’s warmth could not melt, and evaporate, that water once the Trappist-1 A protostar began its core-burning, main sequence, life.

Whatever we discover about these planets is guaranteed to be extremely valuable, whether or not there is life on any or all of them. We are certain to learn more about how earth-like worlds form. The conditions required for stable orbiting, water bearing, life sustaining planets is turning out to be a very complicated story. The answers to the questions we ask will definitely lead to more complex questions. Discoveries such as this are the planetesimals that coalesce into a better understanding of how we got here, who and what we are and where we’re going.