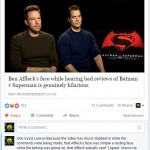 Okay, this is the problem I’ve been harping about for quite some time. People get a hate on for certain celebrities and they just won’t let it go.  It’s worse when these people go out of their way to misrepresent these things. I’m thinking windmills and tilting are involved. I had first seen this kind of douchebaggery in video format when I was watching YouTube videos containing Michio Kaku, a Phd. Back then it was a creationist channel trying to make science look incredibly worried about the current state of physics – which is doing just awesome, thanks for asking. This latest couples my personal pet peeve with celeb-haters (new term, just coined it now) and my personal pet peeve regarding amateur reporting passed off as journalism.

Click the screenshot in this post and watch. While watching pay attention to the following details. The video plays the Sound of Silence while everyone is talking. I get it if you want to use music for emotional impact, but not to drown out the context of the interview, as that is the first clue that you’re being a douchebag. Second, watch Ben Affleck’s face… with the sound off. Notice how it doesn’t really look sad at all. To me it just looks like he’s waiting for the talking to stop. As Mindy S. says:

You guys know that Affleck and Cavill have been sitting in those chairs for ages being interviewed by different people, answering repetitive questions…etc. It’s only natural that he looks exhausted, and if you’ve seen the other interviews that were done in the same setting, he looks exactly the same.

Before the video ends turn sound back on. When you near the end the music stops and Ben can be heard saying “I agree”. This is the second clue that douchebaggery is afoot. Those who believe this garbage may want to ask themselves why Ben would agree with negative reviews. Yeah, yeah, I know you hate the guy, and want to believe he hates himself, but wake up… your head is growing roots. In an effort to bust this I dug up the not dubbed over version of this exact interview on YouTube and what was really said. Click the following picture to view it. 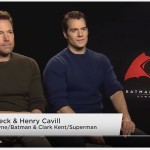 You can hear for yourself that the context of what was said is very different than what The Independent was trying to get you to believe. And the end of the interview now makes much more sense why he said he agreed.

Look, The Independent, I know you are trying to gain more of a following. I’m a blogger, I do the same thing. The difference between douchebag publications, like yours, and the growing number of decent blog sites, like mine, is that you value the ad revenue over the truth while I value the truth over ad revenue. The blatant disregard you’ve shown here ranks you near the very bottom of the list of trustworthy sources, Just below IFL Science. Congrats! You’ve earned the honour of being the One Eyed Lemon punching bag of 2016.