Corporate leaders as politicians will continue to be funny until they’re suddenly not. We all laughed at Donald Trump’s past attempts at running for president of the United States. We even laughed at his rhetoric in 2015 and the birth of 2016. After seeing his 22 point lead in the Republican Primaries most of us aren’t laughing anymore. I know, some people out there in internetland think that having a businesshead at the helm of the most powerful nation on earth (something US presidents never fail to mention, BTW) is a great idea. They think that the recession, current politicians deny, will be over in short order. But, the rest of us, those who actually use our brains, now realize that the horror of the possibility, we recently laughed at, is now about to become a reality.

Following Trump’s lead we now have this asshat, named Kevin O’Leary, who feels it is his solemn duty to bribe Rachel Notley out of Alberta’s Premier’s Office with a donation of… 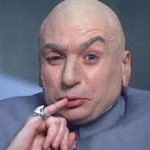 … into the energy sector. Don’t misunderstand O’Leary, he doesn’t mean clean energy, like solar or wind farms, or even geothermal power. He means to inject that money into dirty, dangerous and earthquake causing oil, specifically fracking. Kevin O’Leary, someone who seems to have already heavily invested into Alberta Oil (he had to have because of his one million dollar bribe attempt, something that makes no sense unless he was scared of losing something big), further stokes the fire in Canadians by threatening to attempt leadership of the Conservative Party of Canada. Some of us are still laughing, and given what is going on in the US with Trump and their conservatives, I think we should stop laughing and take his threat seriously.

I shouldn’t have to include the highlights of the past corporate misdeeds that have led to undeniable, human caused, climate change. By now I shouldn’t have to even include all the cases where corporations have sacrificed the health and wellbeing of consumers by hiding the harmful and toxic materials they’ve been putting in our food, or the blatant false claims made on products. By now, even the most ignorant should be aware of some of it, even though the vast majority of the cheating, underhanded and outright illegal practices are still ignored by cognitive dissonance.

Okay, maybe I’m getting a little carried away here. Except that I’m not. The capitalist threat to democracy is real, whether or not you want to admit it, and the entire practice of maintaining a tight grip on the majority of the world’s wealth is bringing civilization back to the days of monarchies. The wealthy, the kings, queens and emperors of the corporate juggernaut, are the real powers at the helm of our governments. Our political systems – systems humanity had worked hard to achieve, losing many lives in the process – have been hijacked by the unrestrained greed of people that already have more wealth than is reasonable for any single entity. The environment, politicians and the 99% have been bent over and figuratively raped for financial supremacy.

After reading this far, my audience can be divided into three camps; those that agree, those that aren’t sure and those that still think that capitalism is the only game in town. It’s not. The fact that you cannot fathom a scenario without a struggle to put food on the table and have an affordable roof over your head only shows that you are incapable of understanding how the system works.

Back to the meat of this article. If you’ve watched Dragon’s Den you know that Kevin O’Leary, and indeed all the dragons, are only interested in the money. They don’t care about giving other people a start in business, or a fair shake on any deal. They want control of the idea and the money. Knowing this is the key to understanding why O’Leary, and Trump, are interested in getting into politics in the first place. You may be naively wondering why those with all the wealth would do this, thinking that they have no reason to cheat the system. Perhaps it is fear that the vast populations of the world are finally waking up, or maybe it is the fact that the corporates see their dream of being the new emperors of new monarchies coming to fruition, or that they simply no longer have to hide behind lobby groups and backroom deals with those we supposedly elect into office.

A while back I made a prediction. I stated that the time to really fear these people, and the loss of our rights as citizens, is when they start to directly and openly run government. The time is nearly upon us. That Trump is so far ahead in the primaries, and that Bernie Sanders has always been seen as a political joke, should hammer my point home.

It is no longer funny. It is no longer a joke. Business in politics is a real threat to everyone, including themselves. Stop laughing and start fighting.