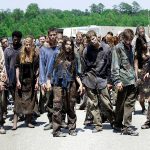 Bioquark has announced recently that they are starting research into reanimating a dead human brain. This announcement has received less than positive reviews, the most adamant coming from the zombie apocalypse community. But, how much of their panic is founded in logic? I can see their own neurons firing incorrectly, thinking that graves will be invaded, cadavers taken, reanimated into mindless cannibals that ravenously eat the flesh of the living, to bring down all of civilization, so that Rick can wake up from a coma and be the hero/anti-hero/hero-again person they like to watch on the Walking Dead.

Okay, some of you aren’t actually thinking that, and I do understand the nostalgia some feel at the current hell hole of civilization we have now being brought down by it’s own ignorant actions. But I’m not talking about you guys. I’m focusing on those who haven’t reanimated their own brains and did a little critical thinking before jumping on the bandwagon of stupid.

Researchers would be focusing on the best possible scenario of reanimating near brain dead coma victims. These are people on life support, who have families who now feel that they have some hope in getting their loved one back from that state between life and oblivion. Thinking they would first try to animate a fully dead brain degraded by decomposition is as insane as the fear of Bioquark sparking a full on zombie apocalypse. But, my rebuttal doesn’t stop here.

I feel it’s necessary to browbeat logic into those who are legitimately afraid of zombies and for no good reason. Zombies exist on TV and movies because it’s fiction. It is not real, though special effects make it seem that way. Dead people cannot get back up, and wander for years in hordes of zombies behaving like the human equivalent of locust swarms.  And that’s mainly because decomposition shatters cellular operation that decimates the nervous system, ends muscular activity and destroys the connective tissues that hold it all together. This is decomposition, guys, and it starts within minutes after death. An hour later the body cannot function… period. A few hours after that the body is stiff, because our little ecosystems have been eating away at our cells and flesh the whole time… the hungry little bastards. Days later, the body is most definitely well into rot and has bloated up, the degree of which depends on a number of environmental factors that includes heat, humidity etc.  And the heavy stink that assails your nostrils is clear evidence that the corpse is in no way getting back up to bite your face off.

Getting away from zombies, and back to reality, the research this company is engaging in may result in advances in alzheimer’s patients and brain damaged victims, to name a couple other areas where we need improvement, and may lead to a much better understanding of neurology in general. So, stop fearing the impossible, stop engaging in fantasy and start understanding the real world and how it works… not the fictional world of the Walking Dead. It’s a TV show… really, I would never lie to you.